Understanding the influence of barriers on smallholders’ perception and adoption of legume technologies in Ethiopia: A qualitative study

Studies on adoption of new products, services and technologies by smallholders mainly look into barriers affecting adoption and application of Rogers’ innovation adoption theory (Rogers, 1983). Following the case study research methodology, I studied qualitatively the interaction between adoption barriers and smallholders’ perceptions to develop a detailed understanding on how different barriers have an impact on different adoption perceptions following Rogers’ adoption theory and thereby know smallholders’ decision to adopt. N2Africa facilitated Public-Private Partnership (PPP) cases are analysed based on four main research questions. These include, (a) how do smallholders perceive the value propositions, (b) what are the potential adoption barriers, (c) how do the barriers influence smallholders’ perceptions, and (d) adoption decisions in the different case studies. Multiple interview protocols used to make interviews with multiple actors in each case study.

From the analysis of key informant interviews – conducted with 13 lead farmers, 5 research partner centres, 12 opinion leaders, 4 private input suppliers, 6 farmers’ primary cooperatives and 6 farmers’ cooperative unions it is understood that smallholders’ perception of the relative advantage of the improved legume seeds as compared to local and/or other varieties are highlighted through enhancements in perceived productivity, marketability and resistance to plant diseases and pests. The high-level abstraction of perceptions, in turn, are described using low level product attributes, for example, grain and biomass yield to explain the perceived productivity and colour and seed size to explain the perceived marketability (see Table below). 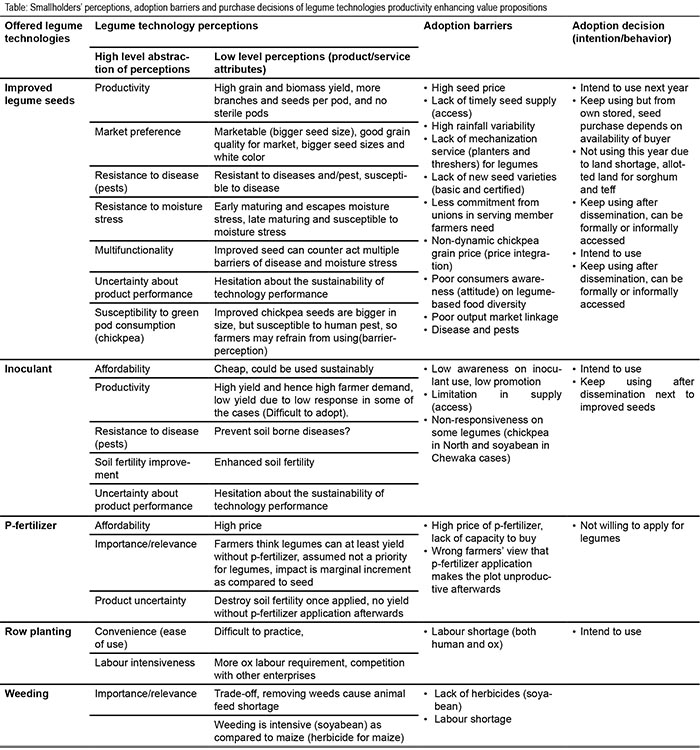 From the interviews it is understood that adoption barriers influence smallholders’ perception of improved legume seeds and hence farmers’ decision to buy (adoption decision). The ‘high seed price’ is an adoption barrier. Farmers tend to use seeds from their own storage for subsequent years, and not from seed supplied by the cooperative. Likewise, the adoption barriers chickpea diseases (rust) and pests (bollworm) influence the variety’s perceived resistance to diseases and pests (relative advantage). Dinku Feyisa, a lead farmer who participated on improved chickpea seed promotion in Gimbichu Woreda Adadi Gole Kelebe said the following supporting the interrelation between adoption barriers, perception and adoption decisions;

“Arerti variety is preferable at market, is high yielder, resistant to rust, residues (leaves and haulms-stems are strong) used as animal feed and is highly demanded by farmers. However, because seed price is high, and the variety is affected by bollworm, most farmers keep using the improved seed from own storage”.

The perceived productivity and resistance to diseases of improved legume seeds (perceived relative advantage), however, varies between the key informants which may also represent perception differences among the broader smallholders. On the other hand, the perceived marketability (perceived relative advantage) and affordability (perceived uncertainty) of the improved legume seed varieties seem to be consistent. For example, farmer Tamiru Yami who participated on chickpea dissemination had an opposing view to farmer Dinku Feyisa’s perceived productivity and resistance to disease of the same variety;

“The variety (Arerti) is susceptible to rust, so half part of the plant didn’t fill grains; no other varieties are affected like this. But the variety has good market preference, better seed size (medium). High seed price of the variety made it difficult to buy from the cooperative. Farmers source the variety from local market but not from seed supplying cooperatives”.

My next study will build on the findings of this qualitative study, and quantitatively measure the influence of adoption barriers on smallholders’ perception of the value propositions and consequently their intention to adopt technologies. In doing so I will identify the main barriers that influence smallholders’ adoption intentions.