Nitrogen is the nutrient element most limiting for crop growth. Nitrogen deficiency results from continuous cropping without adequate inputs of organic manures or mineral fertilizer. Biological nitrogen fixation is the process that changes atmospheric nitrogen gas, which is inert, to a biologically useful form. Chemically, this is similar to the Haber-Bosch process, which is the principal method of producing ammonia for nitrogenous fertilizers, by direct combination of nitrogen and hydrogen under high temperature and pressure. Although only bacteria possess the enzyme nitrogenase which is needed to fix nitrogen gas from the atmosphere into a form usable by plants, legumes have evolved to form a close symbiotic relationship with a group of N2-fixing bacteria collectively called ‘rhizobia’. When rhizobia interact with the roots of leguminous crops, nodules are formed. In the nodules, nitrogen from the air is fixed into ammonia and taken up by the plants. The fixed nitrogen contributes directly to the protein-rich grain which is harvested for human consumption. When legume residues are incorporated into the soil the N tends to be released quickly and can contribute to substantial improvements in yield of subsequent crops.

Assuming that only seeds are harvested, net soil nitrogen accrual from the incorporation of grain legume residue can be as much as 140 kg N ha-1 depending on the legume variety (Giller, 2001). Naturally, however, nitrogen fixation rates are highly variable and range from several hundred kilograms per hectare per year to rates that are close to zero. To reduce this variability and ensure effective nitrogen fixation, agricultural scientists have manipulated the symbiotic relationship between legume and rhizobia in agronomic practice, employing selected combinations of bacteria and legumes in specific situations to obtain maximum crop production and nitrogen fixation on land which is of low fertility and frequently unsuitable for growth of non-legume crops.

Importance of legumes in African agriculture

Grain legumes are a key source of nitrogen-rich edible seeds, providing a wide variety of high-protein products and constituting the major source of protein in the diets of the poor in most parts of sub-Saharan Africa. Largely grown as subsistence food crops, grain legumes are predominantly crops grown by women and used within the family, with an annual per capita consumption of about 9 kg, providing 88 kcal/capita/day. In addition, legume grain often has a good market demand and when farmers are linked to output markets, legumes can fulfil roles as important cash crops. Groundnut and soybean for example are major sources of edible oil and other industrial by-products.

Residues of grain legumes as well as herbaceous and fodder tree legumes provide an excellent source of high quality feed to livestock, especially during the dry season when animal feeds are in short supply. In the sub-humid savannah zone of West Africa, residues or cowpea and groundnut are highly valued as fodder for livestock. In the central highlands of Kenya, where there is a thriving smallholder dairy industry, fodder legume trees are used to supplement livestock feeds, resulting in enhanced milk yields and farmer incomes.

Thus, legumes represent a major direct source of food for man and livestock and, therefore, make a critical contribution to increased food security of subsistence farmers, reduced costs of food for poor consumers and enhanced rural incomes. Moreover, the ability to fix atmospheric nitrogen makes legumes excellent components within the various farming systems because they provide residual nitrogen and reduce the needs for mineral nitrogen fertilizers by associated non-legumes. The opportunity exists to improve yields of legumes in sub-Saharan Africa since current yields are only a fraction of their potential (Table 1). When yields increase, the amount N fixed also increases.

Table 1. Average grain yields (t ha-1) of the targeted legumes in Ghana, Nigeria, Ethiopia, Uganda and Tanzania (average over 2008-2012, based on FAO statistics, no information on faba bean is available from FAO) and the yield potential of those legumes (PROTA, 2006).

Maximal rates of nitrogen fixation recorded in the tropics reach an astonishing 5 kg N ha-1 day-1 with the green manure Sesbania rostrata (Giller, 2001). We have measured more than 250 kg N ha-1 year-1 of fixed N2 in soybean in southern Africa on smallholder farms with associated grain yields of more than 3.5 t ha-1. This demonstrates the great potential of legume nitrogen fixation for providing N to the farming system. However, less than 8 kg N ha-1 year-1 is often fixed by grain legumes when expressed across the whole area of an African smallholder farm. The low N fixation rates are due to a lack of substantial area (<15% of the farm area) planted with legumes and environmental stresses that prevent effective nitrogen fixation (<35 kg N ha-1 fixed) (Mapfumo et al., 2001). Successful nitrogen fixation by legumes in the field depends on the interaction:

where environment encompasses climate (temperature, rainfall, day length etc to encompass length of growing season) and soils (acidity, aluminium toxicity, limiting nutrients etc). Management includes aspects of agronomic management (use of mineral fertilizers, sowing dates, plant density, weeding). Incidence of diseases and pests are also a function of (GL × GR) × E × M. Thus establishment of effective BNF depends on optimizing all of these components together. Often, however, legumes are grown in poorer soils with little application of manure or inorganic fertilizer compared to staple food crops such as maize or compared to cash crops. Legumes are also allocated less attention in terms of labour for crop management. In our work so far, we observed that E and M often override the potential of the legume/rhizobium symbiosis for BNF.

As shown in Figure 1, substantial increases in BNF can be made based on existing legume and inoculant technologies (for GL × GR × E × M) using current knowledge. Further substantial increases can be gained by increasing the area under legumes and retaining the legume residues in the field. Selection of elite rhizobial strains with enhanced BNF efficiency is needed to further increase the amounts of N2 fixed. Moving to a longer time scale, breeding of legumes, in combination with plant physiology research on environmental stress in the legume/rhizobial symbiosis, has the potential to even increase benefits from BNF further. Finally, genetic engineering approaches to enhance BNF hold promise, but may lead to enhanced BNF in farmers’ fields only in 30-50 years. 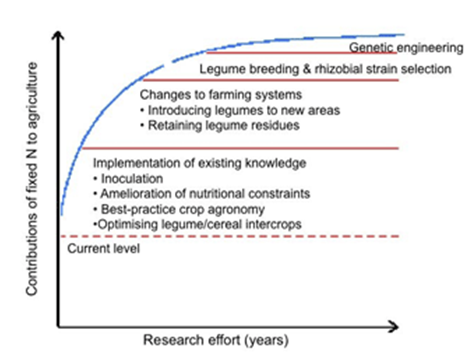 Figure 1: Potential returns to investment on research and development investment through different approaches to enhance the inputs from BNF (modified from Giller and Cadisch, 1995).

Nitrogen from the atmosphere is ‘fixed’ into ammonia when the legume plant forms an effective symbiosis with rhizobia. Rhizobia in the tropics constitute a highly diverse group of both fast- and slow- growing types with a wide range of symbiotic specificities. Legume hosts differ in the range of rhizobia with which they form symbioses. At one end of the spectrum are legumes such as chickpea (Cicer arietinum) and soybean (Glycine max) which nodulate with a restricted number of rhizobial strains or species and are thus considered as specific in their rhizobia requirement. At the other end is cowpea (Vigna unguiculata) which is considered as the most promiscuous (or non-specific) of the grain legumes, nodulating with a wide range of rhizobia. Legumes that have a specific requirement for rhizobia need inoculation, a process in which the legume seeds are coated (inoculated) with the required rhizobia, commercially available as inoculants.

The global market for rhizobial inoculants is dominated by soybean, due to its strong requirement for inoculation. The specific nodulation requirement of most commercial varieties of soybean arose because they were bred largely in North America where indigenous rhizobia compatible with soybean were absent. This has led to inoculation with soybean being the standard practice in North America. The North American breeding program was highly successful in increasing potential grain yield of soybean such that materials from North America have been used in many other countries.

In sub-Saharan Africa, however, inoculant use in smallholder farming systems is generally low due to the poor presence of inoculant infrastructure and expertise. However, not all soybean varieties are equally specific in their rhizobia requirements. Promiscuous, multipurpose varieties of soybean have been selected in Nigeria by IITA by crossing high-yielding varieties from North America with more promiscuous materials from Asia (Giller, 2001). In southern Africa, highly promiscuous varieties were identified from early introductions of soybean that originated from China (Mpepereki et al., 2000). In areas where inoculants are not readily available, the promiscuous varieties have a particular niche for smallholder farmers. Yet, in the first phase of the project, we observed that also the promiscuous varieties respond positively to inoculation.

Also legumes that are relatively promiscuous in their rhizobial requirement (e.g. bean) can benefit from inoculation because those legumes naturally form nodules also with ineffective strains. Inoculating legume seed with elite rhizobia strains then guarantees effective nitrogen fixation. Earlier studies showed consistent small responses to inoculation of bean that gave a mean yield increase of around 8% across 30 trials in the highlands of East Africa (Amijee et al., 1998; Giller et al., 1998). With highly effective elite rhizobia strains and improved quality inoculants it is worthwhile to invest in research to develop inoculant technologies for beans and other rather promiscuous legumes. 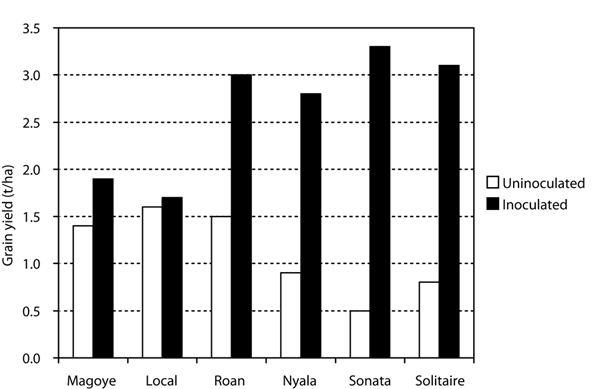